Nothing arid about this art 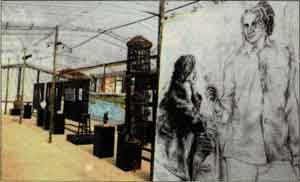 29 Oct Nothing arid about this art

You might have wondered, driv­ing in an easterly direction along Lynnwood Road, about the new building there, which is vaguely reminiscent of a farm stable and decorated with modern sculp­tures and pottery.

This very appropriate space, combining an industrial feel with the starkness and nostalgia of a stable in the Karoo, has been turned into an art gallery, and the idea came from experienced gallery owner Kerneels Laubscher and Catherine Gaum.

They aim to exhibit a variety of styles with the focus on a cre­ative edge rather than on com­mercial value.

They would like to exhibit well established artists like John Clarke and Guy du Toit, who, despite their established styles, never lose their fresh approach to their subject matter, together with new artists and unknown students with messages from the future.

This attitude is quite obvious in their first exhibition.

Artists in this category include Clarke, with his mysteri­ous desertscape called Poles Apart,Carla Crafford’s Reeds, Lake Sibayi, in which the

relationship between photo and draw­ing or graphic art is reversed, and Eric Duplan’s strikingly magical Moon sleep,combining an ancient landscape with a futuristic dreamer.

A strange nostalgia for what has been lost can be felt in works like Jaco Benade’s Momenta,with pieces of historical porce­lain and relief sculptures lost in a vast landscape, Phyllis Green’s photo of a fountain angel, and Griet van der Meulen’s Hold Onto, depicting a hand holding onto a bird and a doll, as well as her Shrine to 17 disappearing species per day.

A feeling of the transience of life and the mystery of ordinary objects is experienced in Antoinette Uys’ Transitional Moments, Du Toit’s Hoenderhaan and Crafford’s Undercover.

A sense of playful wonder can be detected in works like Anette
Pretorius’ Fragmente, depicting fragments of a wooden horse with the technical excellence for which the artist is known.

But despite all the variety, one is strongly aware of an artistic style developing: a kind of compromise between artistic integrity technical reliability and a strong element of unpredictability

One sincerely hopes that the adjoining restaurant will make works like these available to a  public that might not usually go out of their way to see it.